New Slovenian 2 euro commemorative coin will be out tomorrow Franc Rozman - Stane was born on 27 March 1911 in Spodnje Pirniče near Ljubljana. He endured a poor and difficult childhood. At 15 he worked in a tavern, and later trained to be a baker's assistant. He was fascinated with the army as a boy, and was one of the first Yugoslav volunteers in Spain following the outbreak of the Spanish Civil War. He completed non-commissioned officer school in Jarama. He became a lieutenant and company commander, and later a captain and battalion commander in an international brigade. He was a grave and determined fighter. He spent some time in French camps following the war in Spain, and later escaped and returned home.
Immediately following the occupation of Yugoslavia, he organised partisan units in the Štajerska region, and was a military instructor and organiser of the Štajerska battalion. In the spring of 1942 he became commander of the Slovenian partisan brigade established in Kremenik in the Dolenjska region. The brigade comprised more than 300 fighters, and was the strongest partisan unit of its time. As general, he was commander of the High Command of the National Liberation Army and the Slovenian partisan resistance from July 1943 until his death. He died on 7 November 1944 in the Kanižarica Liberation Front Hospital in Črnomelj as the result of wounds suffered during the testing of a new weapon. He was proclaimed a national hero of Yugoslavia following his death, and is buried in the tomb of national heroes in Ljubljana.
Commander Stane, as he was referred to by the partisan fighters, represented the ideas and hopes of the Slovenian nation during the national liberation struggle, and is considered one of that period's leading figures.
Slovenia is issuing a two-euro commemorative coin to mark the 100th anniversary of the birth of the national hero, Franc Rozman - Stane. The coin will bear an image of Commander Stane, while the lower portion of the coin will bear a five-point star, the symbol of the movement to which Commander Stane belonged.
Original design by: Edi Berk, Ljubljana
Production and minting: Mint of Finland, Vantaa, Finland
Minted: 1 million coins
Date of issue: 21 March 2011
---------------------------------------------------------------------------------
A Seller from euroHOBBY is offering the following items for sale ; 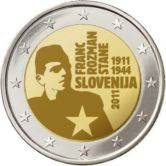 Comment by Marko Porenta on March 20, 2011 at 20:12
this coin will divided Slovenians; it's a huge "comments war" on some slovenians websites hehe in my opinion, they should have put something else on it and not this partisan

Well, we'll know for sure tommorow.