Euro-area citizens and residents have selected the winning design of a new euro coin that will be issued next January to commemorate 10 years of euro banknotes and coins. Close to 35 000 people voted in an online competition from a choice of five designs that had been pre-selected by a professional jury following a design competition among citizens…

This Thursday 30th June, the European Commission will announce the design that won the competition 10 Years of Euro Banknotes and Coins - soon after the announcement the preparations for minting will start. euroHOBBY will bring you all the news country by country as it rolls out - just check this page frequently…

The current market price for the 2 euro commemorative coin from Monaco that will be issued next month has dropped sharply to around €170. Till few weeks ago the price was above €300 and sometimes it was as high as €500. When all the 148,000 coins are out we except the price to fall even more down.

Discount on the So Many €uros Software So Many Euros Deluxe Edition is the software for all… 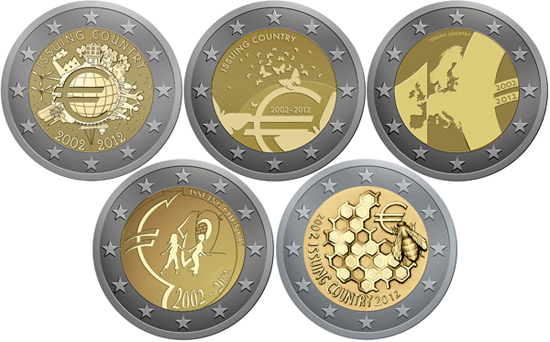 Today is your last chance to vote for the design that you wish to appear on the next year common 2 euro commemorative coin that will be issued in all the euro area. The winning design will be announced in a week time on the 30th June. The minting preparation will follow few weeks after. To Vote Go Here…

Minting of the France €2 Commemorative Coin 2011 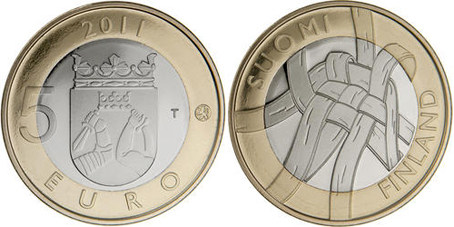 The 2 euro commemorative coin 2011 from France will be out tomorrow 21st June - as soon as we get pictures of the actual coins and rolls we will post them on our website. euroHOBBY has partnered with a seller who is selling coins and rolls of this coin - click the below banner Based on the Slovenian nation's right to self determination, more than 88% of Slovenes voted for a sovereign and independent Slovenia at a referendum held in December 1990. This decision was followed by events that represented a breakthrough in the history of the Slovenian nation.

Slovenia became a sovereign and independent country on 25 June 1991, when the Assembly of the Republic of Slovenia adopted the Basic Constitutional Charter on the Sovereignity…

Few days ago we annouced that the Central Bank of Malta on the 23rd June will be holding a symposium about the €2 Commemorative Coins series - Constitutional History. Now we can reveal all the coin designs in the series. The 5 coins will be highlighting milestones in Malta’s constitutional history namely: The Official Journal of Monaco is confirming that Monaco will issue 147,877 pieces of the wedding 2 euro commemorative coin and 7,000 of each denomination of the standard coins (1c-€2) all dated 2011.

Monaco increased the issuance volume for the Monaco €2 standard coin…

In this article we will present you some statistics on the origin of the euroHOBBY members. Till few months ago the website was private meaning visitors could only visit the main page and had to subscribe in order to view the rest. Now all visitors can view the whole website without subscribing only they cannot post. This switch gave us an advantage in search engines…

The mint of Finland is holding a design competition entitled Protecting the Baltic Sea. The winning design will appear on a collectors' coin which will be issued this October. A professional jury has selected the best 11 designs submitted by secondary school students. Now it is up to the people to…

﻿﻿﻿Sixty-four per cent of the Swedes are against Sweden adopting the euro - only 24% are in favor. Last November, 58% were against while 29% were in favor, thus a drop of… Slovenia will issue its annual BU folder next Monday, 20th June. The folder will contain the 8 standard coins (1c - €2) dated 2011, this year 2 euro commemorative coin (Franc Rozman-Stane) and 3 euro collectors' coin ( 20thanniversary of Slovenia˙s independence). The folder will be available in two…